Specially invited members of the public and press were able to walk through newly designed ticket gates, and ride aboard the train as it briefly rocketed along the 42.8-kilometer test track at a speed of 500 km/hour, NTV reported.

The driverless maglev train utilizes a high-tech propulsion system called the “L-Zero” system that first brings the train to a speed of 160 km/hour. Upon reaching 160 km/hour, the train initiates the maglev system and slowly accelerates to 500 km/hour, JR Tokai said.

The current fastest train in Japan is the Hayabusa shinkansen which travels at 320 kph.

JR plans on offering official test-rides to the broader public in November.

The maglev train, which will run between Tokyo and Nagoya, is expected to be operational by 2027. JR Tokai said there will be four stations on the 286-kilometer route between Shinagawa and Nagoya. The Shinagawa and Nagoya stations will be about 40 meters underground, Sankei Shimbun reported. The first station after Shinagawa will be Sagamihara in Kanagawa Prefecture (also underground). The next three stops will be above ground in Kofu, Yamanashi Prefecture, Iida, Nagano Prefecture and in Nakatsugawa, Gifu Prefecture. 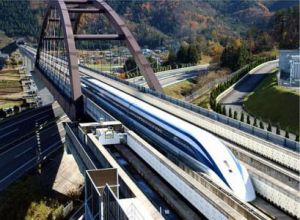 The US may finally be on the verge of getting a new high-speed rail service in the Northeast, but it isn’t because of a change in policy, it’s simply because a state-controlled Japanese bank is offering up $5 billion in financing as part of a push to bring the maglev technology to the American market.

The specific aim of the $5 billion is to build a high-speed (up to 311 mph) maglev train route between Washington DC and Baltimore. The said route would — quite impressively — cut the travel time between the two cities down to about 15 minutes.

The Japan Bank for International Cooperation is the ultimate origin behind the $5 billion in capital referenced in the filing to state regulators that an investor group recently submitted. Also worth mentioning is the fact that the privately owned Central Japan Railway Company has completely waived the licensing fees for the use of its proprietary maglev technology.

As per the filing to the Maryland Public Service Commission, the old state franchise rights of an interurban electric rail system that linked the cities in the early 1900s (Washington Baltimore & Annapolis Electric Railroad) are being sought.

The details of the so-called Northeast Maglev plans have been hinted at, but the filing released the first details about the Japanese government’s involvement in the route. Previous reports on the Northeast Maglev also mentioned that the connection would continue on to New York City.

Such trains are capable of extreme speeds, thanks to their frictionless, magnetically-controlled motion above their tracks. The technology has been approved in Japan and is to be rolled out next month on an initial stretch of track that planners hope will eventually connect Tokyo, Nagoya and Osaka.

A spokeswoman for the Maryland PSC, which regulates “common carriers” in the state, including passenger rail providers, confirmed receipt of the application. The agency will open a case on the application, accept comments from staff and others, and conduct a hearing on whether granting Rapid Rail’s request “is consistent with the public convenience and necessity.”

“In a back-to-the-future type way, you see that there was already a Baltimore-Washington service that previously existed  … sort of sitting on the shelf waiting for people to pull it off and dust it off, for us to get back to providing what they had in 1935,” stated Wayne Rogers, one of the major shareholders in backer Rapid Rail, and also chairman and CEO of The Northeast Maglev, a separate Washington-based company backing the project.

The project already seems to have a fair amount of public support though, as evidenced by Mayor Stephanie Rawlings-Blake’s comments: “Because Baltimore provides millennials and empty-nesters with affordable city living, this speedy mode of transportation will provide residents who work in DC with a convenient alternative, while also giving tourists throughout the country who visit our nation’s capital easier access to enjoy all of the attractions Baltimore has to offer. Ultimately, this would help the local economy, as well as help to grow the city. It could be a game-changer for Baltimore.”

As of now, the total cost to develop the route isn’t quite clear, but the general consensus seems to be that it would require at least another $5 billion, possibly another $10 billion. So even with the $5 billion pledged by the Japanese bank, it may very well end up being the case that the project doesn’t go ahead.

In addition to the relatively high costs, there are other criticisms as well — most notable of which is that without the (extremely expensive) expansion of the route to New York, the route wouldn’t amount to much more than a novelty, according to some.

President and CEO of the US High Speed Rail Association Andy Kunz, a supporter of more conventional high-speed rail systems, carried that line of argument in this comment: “If this does get built, it’s going to end up looking just like the Chinese maglev, which is almost a joke. People ride it as a novelty, but not for transportation. I would really be (angry) if our government forked over $5 billion for this little system to Baltimore when it could move more people farther distances with the same amount in California.”

Though it would also certainly seem that there’s a growing market in the Northeast for high-speed rail — whether it’s maglev or other more-conventional forms that eventually provide it, there’s a need there. Hopefully someone gets around to getting something done in the near future.

A final interesting note: the proposed route includes plans for a system of three underground stations to be built at BWI Thurgood Marshall Airport, giving those that arrive there an easy and fast commute into DC or Baltimore. That would be nice….

Maglev is a method of transportation that uses magnetic levitation to carry vehicles with magnets rather than with wheels, axles and bearings.